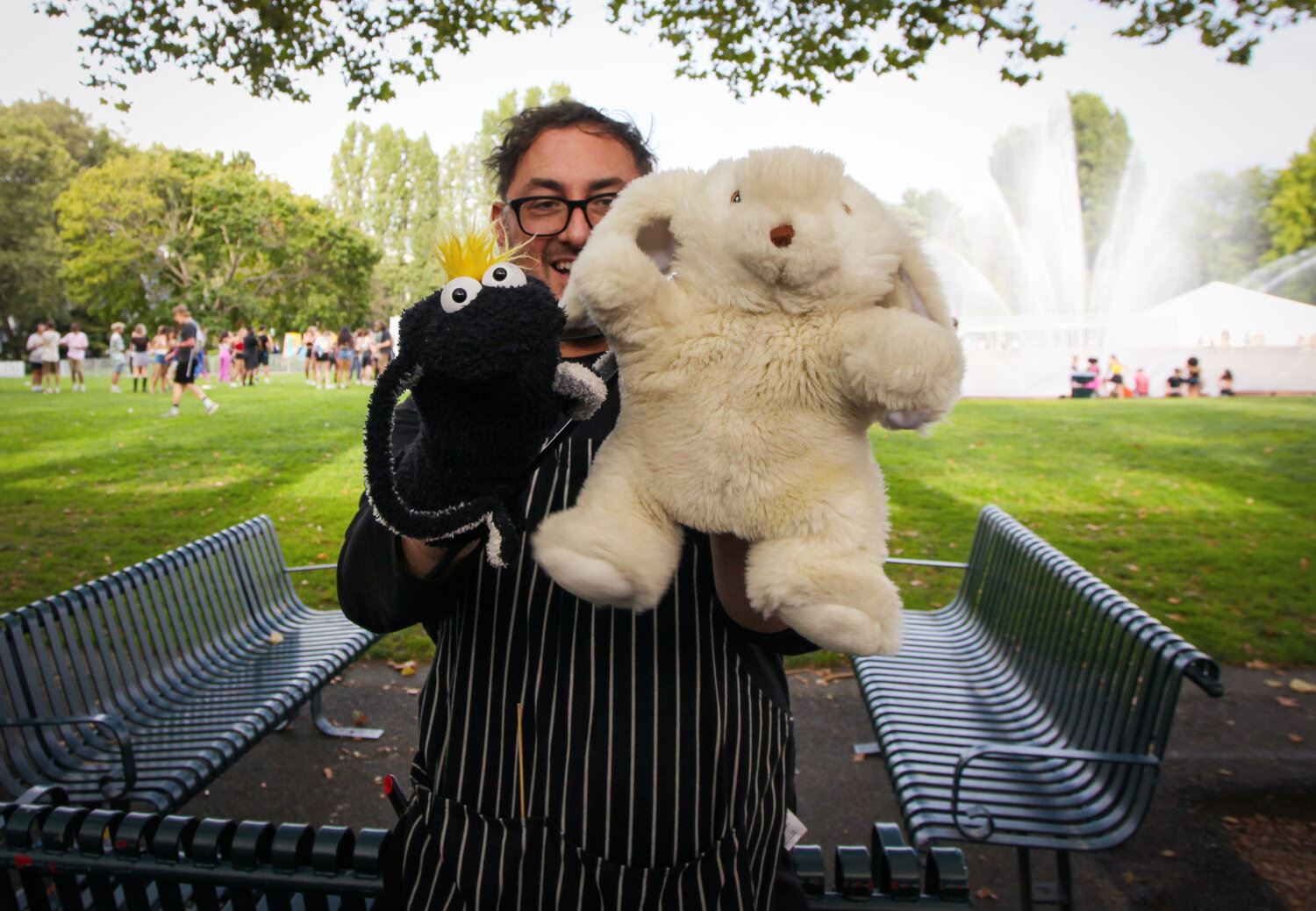 I'm fine with any pronouns but most use he/him. Having worked in special events and entertainment production since 1995, I’m proudly a founding class member of The Las Vegas Academy of International Studies, Performing, and Visual Arts. I now reside in Seattle, WA where I support multiple area festivals, queer nightlife, and non-profit events while serving as the events and rentals coordinator for Seattle Central College.

I’m honored to be both the President of Puppeteers of America and the National Puppetry Festival Director in my sixth and final year of board service. I have been lucky to meet so many wonderful puppeteers on this journey and enjoy their support and knowledge as I explore and learn the art. My hope is that you have been touched by this event and will treasure our time spent together fondly. 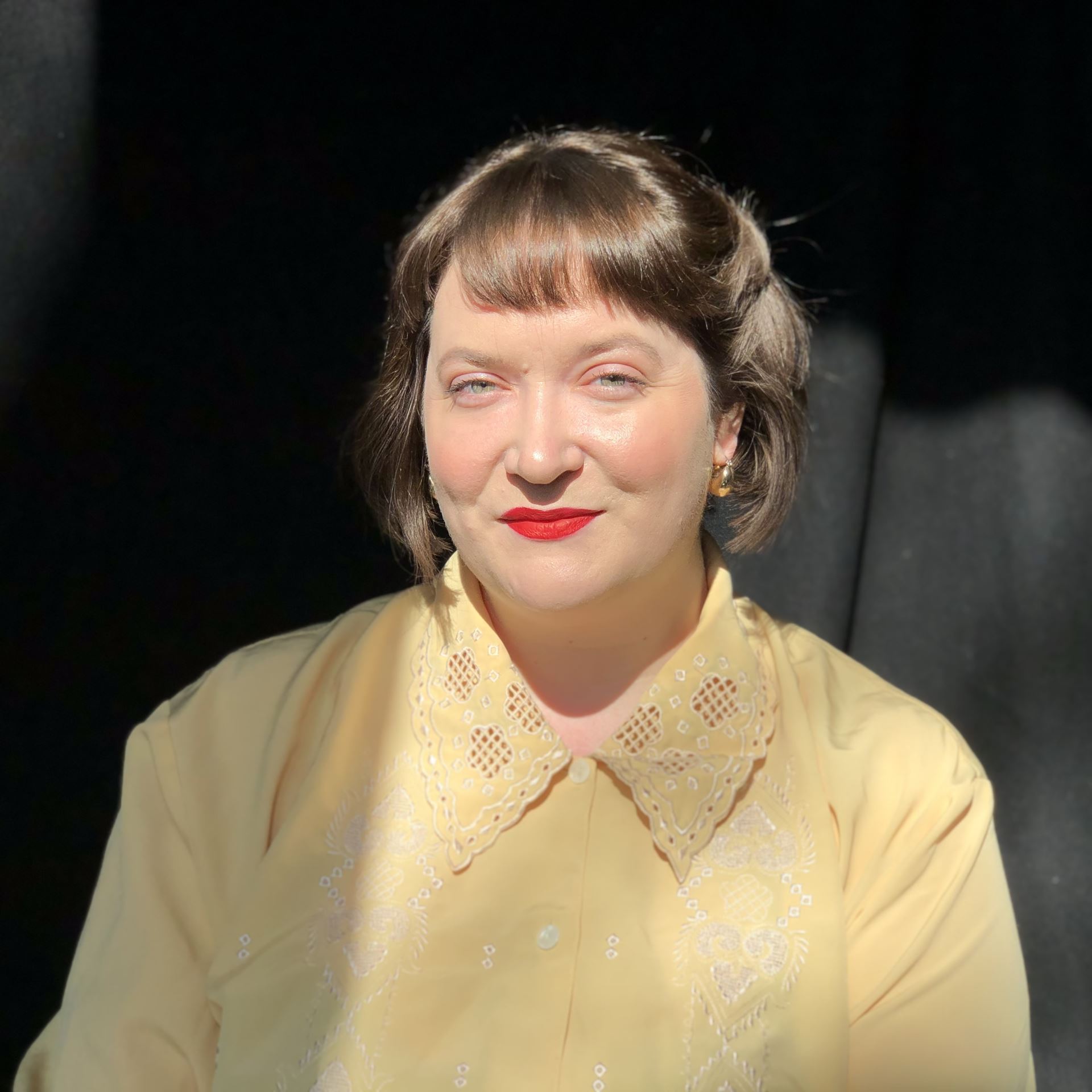 Ball’s recent original work Kopfkino debuted in Berlin, Germany and was additionally presented at the Malta Festival in Poznań, Poland. The work has been presented in English and Polish with more versions on the way.

Ball recently traveled to Prague, Czech Republic in August 2022 to work with Puppets in Prague (Mirek Trejtnar & Leah Gaffen) to build original, traditional Czech wire marionettes, which was followed by several performances of a devised version of Aladin (dir. Peter Varga) at the Letni Letna New Circus and Theatre Festival.

They also previously performed in an Original Pronunciation production of Julius Caesar (dir. Kate Pogue) which traveled to Edinburgh, Scotland for presentation at the Edinburgh Fringe Festival in 2013.

They currently serve as the Registrar for the 2023 National Puppetry Festival (Puppeteers of America) and have previously served as a Company Member for Next Iteration Ensemble, on the Advisory Board for Horse Head, and the Board of Directors for The Landing Theatre Company. In addition to traditional performance and administrative work, Ball has done vocal work for several podcasts and audio dramas, as well as written, directed, and performed for a sketch comedy and an improv troupe. 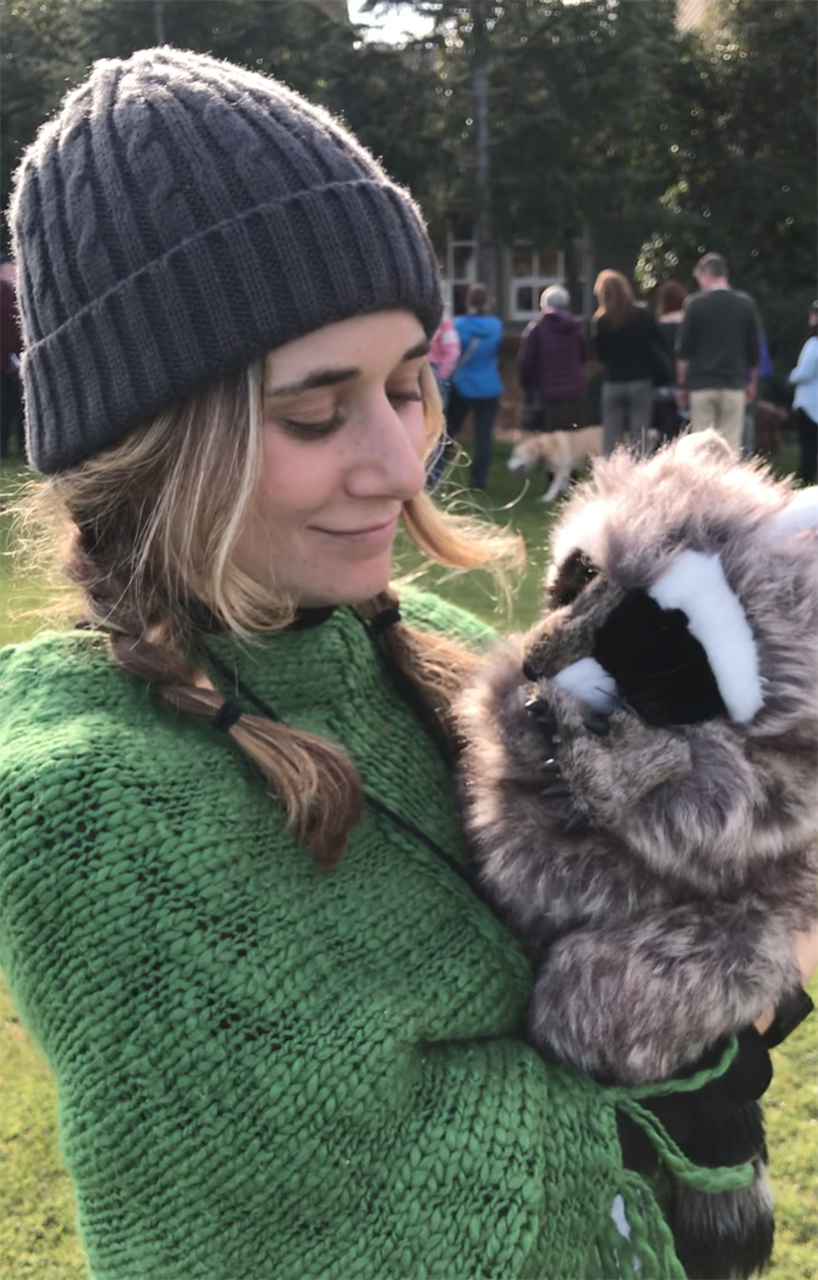 Gabrielle graduated from Booker T. Washington HSPVA in Dallas, Texas specializing in playwriting, mask work, and mime and earned her B.A. from the University of Maryland in English Language/Literature and Plant Science. Her original plays have premiered at The Kitchen Dog Theatre, The University of Houston, The Paul Baker New Plays Festival, The Blank Theatre, The University of Maryland, and The Center San Francisco. She has trained and performed with the San Francisco Clown School, trained with Dell Arte International, The Kennedy Center "Making Connections through Puppetry" series, Mime Lorin Salm, and Fraggle Rock's wonderful, Lee Armstrong. Some of her performance credits include: Radio Disney, Sirius XM, Children's Fairyland, and The Marin Mycological Society Mushroom Festival. She is an active member of the San Francisco Bay Area Puppet Guild and was the Membership Chair from 2021-2022.

Gabrielle taught Wilderness Education in schools and residential programs, eventually designing her own holistic biome-specific Wilderness Program for Grade K-8 with original puppets, song and games. She has also authored a children’s book about mushrooms with her mycology professor at the University of Maryland.

Gabrielle currently leads a Waldorf Grade Two class on the North Shore of Kauai where she lives. She is stoked play and be surrounded by inspiring dramatic artists at her beloved Alma Matter. 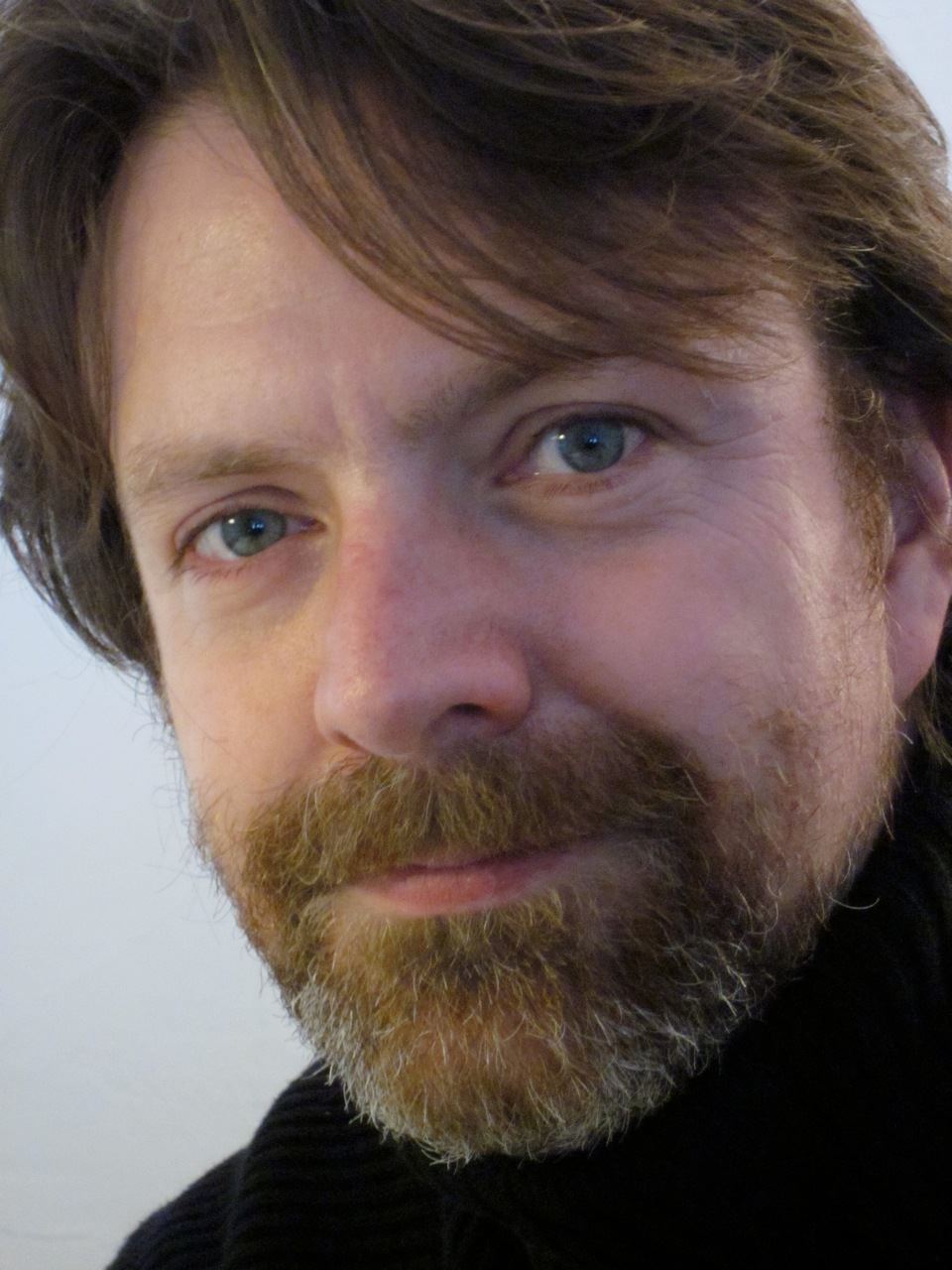 Charles Conley is the bookkeeper for Puppeteers of America and several other organizations. He is also a writer who has received fellowships from the Fine Arts Work Center and the Sozopol Fiction Seminars and published in North American Review, Harvard Review, Southern Review, and many other fine print and online journals. Much of his recent work has been in video, which can be found at www.AnthelionProjects.com. 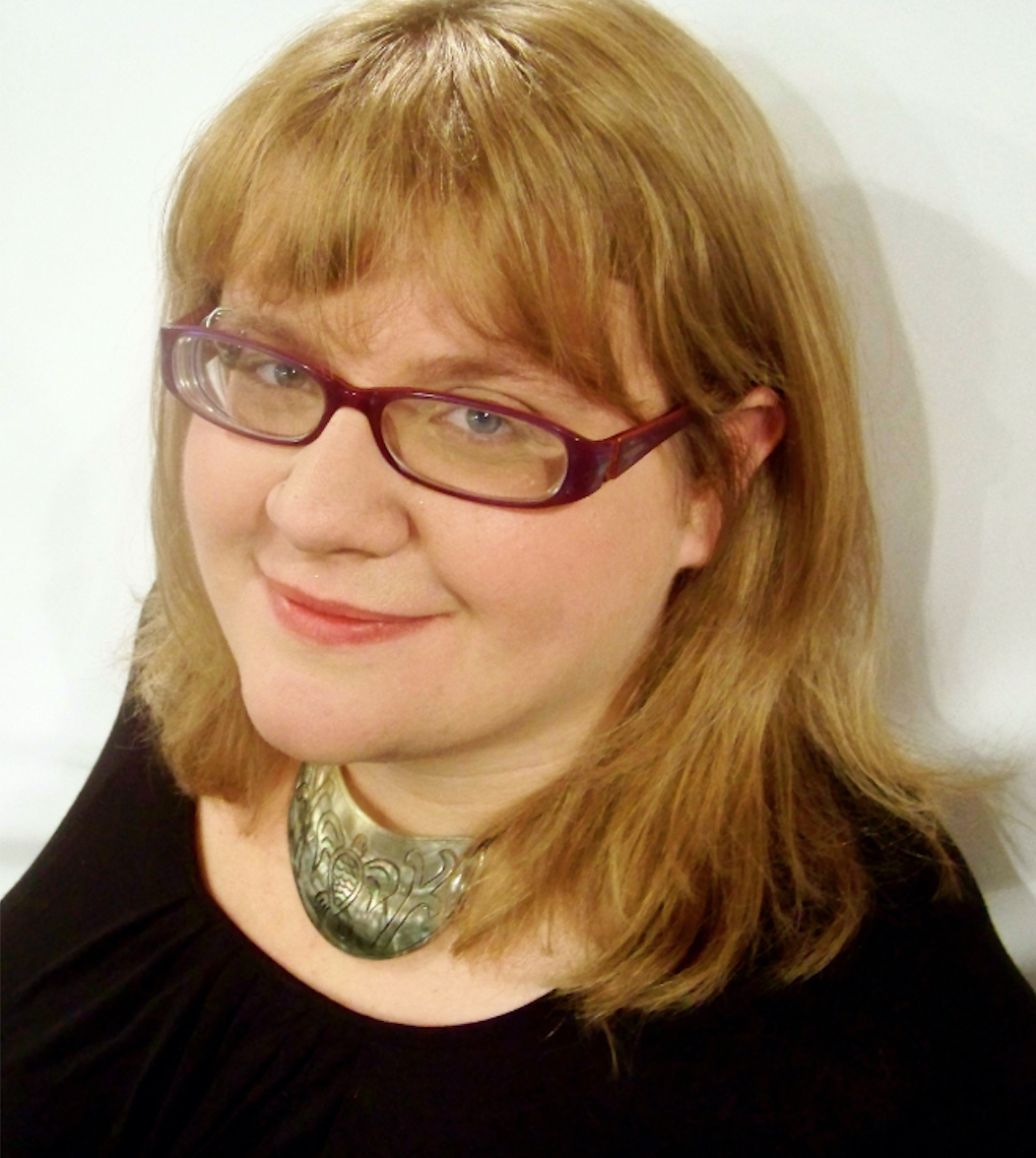 Under Kat's direction Sea Beast has initiated a number of exciting puppetry projects including a series of original projects and productions including the Puppet Meltdown Puppet Slam, “The Shadow Puppet Conspiracy”, “The History of Light” and “Méfiez-Vous de la Vache-Garou”, which won best in show at the Chicago Fringe 2013. Her work has been featured all over the country including the Field Museum of Chicago, Illinois Wesleyan University, Fever Up, Chicago Shakespeare Theatre, Lookingglass Theatre Company, the Art Institute of Chicago the Detroit institute of Art, and the Skirball Cultural Center in California. She has also presented a variety of performances, workshops and pre-conference intensives at Puppeteers of America festivals dating back to 2006 and was a performer with Puppet Sports of Quebec at the UNIMA International Puppetry Conference in Perth Australia 2008. Most recently Kat has been working with C.A.P.E. as a teaching artist at Leman Junior High in West Chicago, IL.

She has been a member of the Puppeteer of America since 2002 and has served on the Board of Trustees, The Scholarship committee, the Archival committee, the assistant Workshop Coordinator for the Minneapolis National in 2007, and is their current Membership Officer. She has been published multiple times in the Puppetry Journal and was a featured artist in Puppetry International’s issue of “40 under 40. 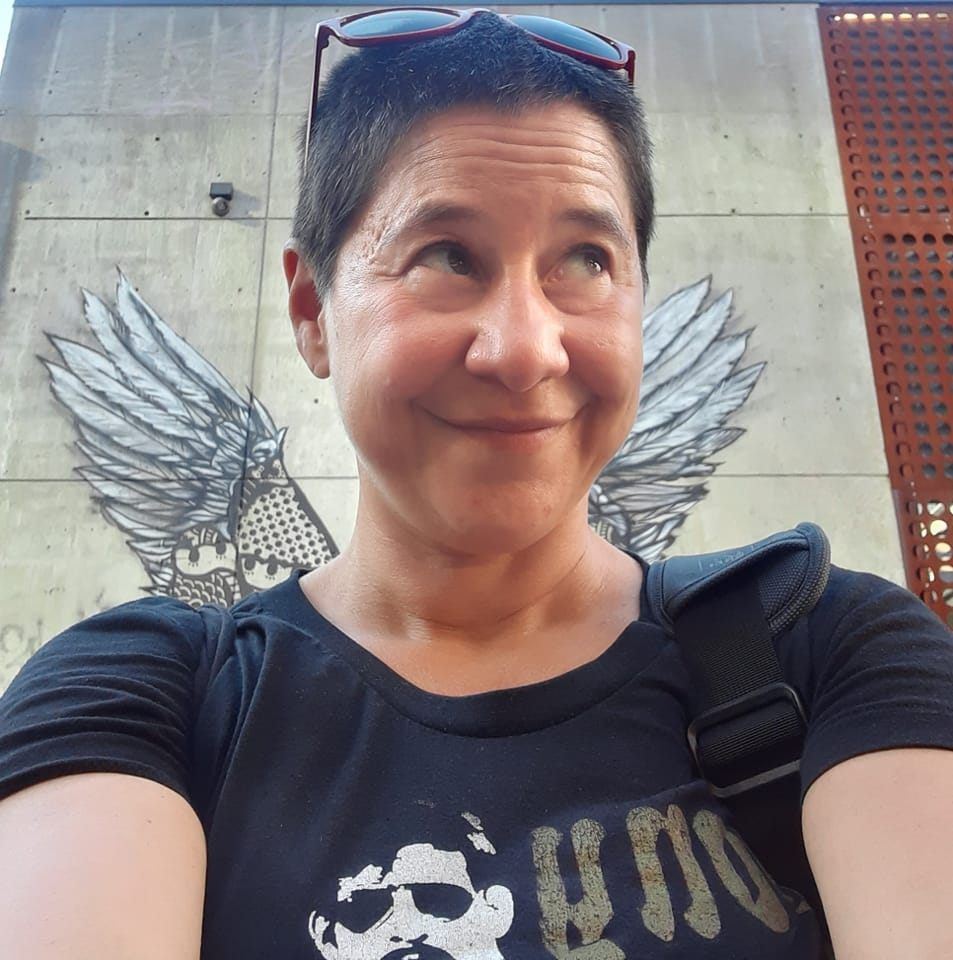 Katie Phoenix resides in Seattle and is a lover of the arts and small businesses. Her professional background is in marketing and promotions. Most of her professional life has been devoted to creating, developing and maintaining relationships. She's pretty good at media planning and out-of-the-box solutions too. Katie thrives on meeting new people and traveling.

Bonnie Kim, Korean-American multidisciplinary & puppet artist and teaching artist  based on Hawaii Island, received her Master of Fine Arts degree in Theatre from University of Hawaii at Manoa, focusing on arts education with puppetry, masks and movement. Her passion for puppetry has led her to travel to study and create various types of puppetry works, such as giant puppets, hand puppets, Czech marionettes, shadow puppets and rod puppets in the United States, Europe and Asia. Her puppet shows and works have been presented in around the world in person as well as virtually.  She has also done numerous collaborative multidisciplinary projects with other artists in Hawaii, Europe and Asia.

She also works as a teaching artist with Hawaii State Foundation on Culture and the  Arts for the Artists in the Schools Program. For this program, she provides puppetry  and theater residencies to K-12 grade students in public and charter schools in Hawaii.  As a teaching artist, she has taught drama, puppetry, masks, creative movement and  recycle art to children and adults for many arts organizations and schools.

Gordon Smuder is a puppeteer and builder. Owner of Minneapolis-based The Puppet Forge, his company is focused on puppets for media…television, movies, and internet.  Gordon also co-created the award-winning all-puppet sitcom for late-night audiences Transylvania Television. 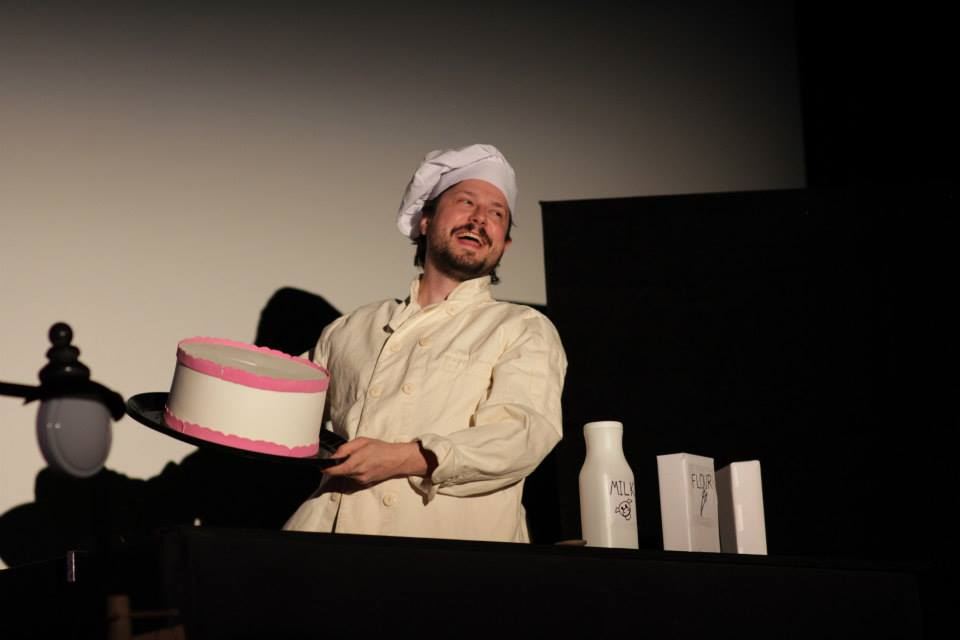 Beau is a puppeteer, producer, and host from Atlanta, GA, and is thrilled to be back at the PofA National Festival to present the 2023 National Puppet Slam! Beau produces and hosts the Atlanta puppet slam, The Puckin’ Fuppet Show. He created and produces the Puppetry Track at Dragon Con, featuring 45+ hours of puppetry programming including celebrities, performances, workshops, and panels celebrating puppetry in pop culture and introducing convention goers to the art of live puppet theatre. YOU SHOULD GO! Dragoncon.org PUPPET SHOW!